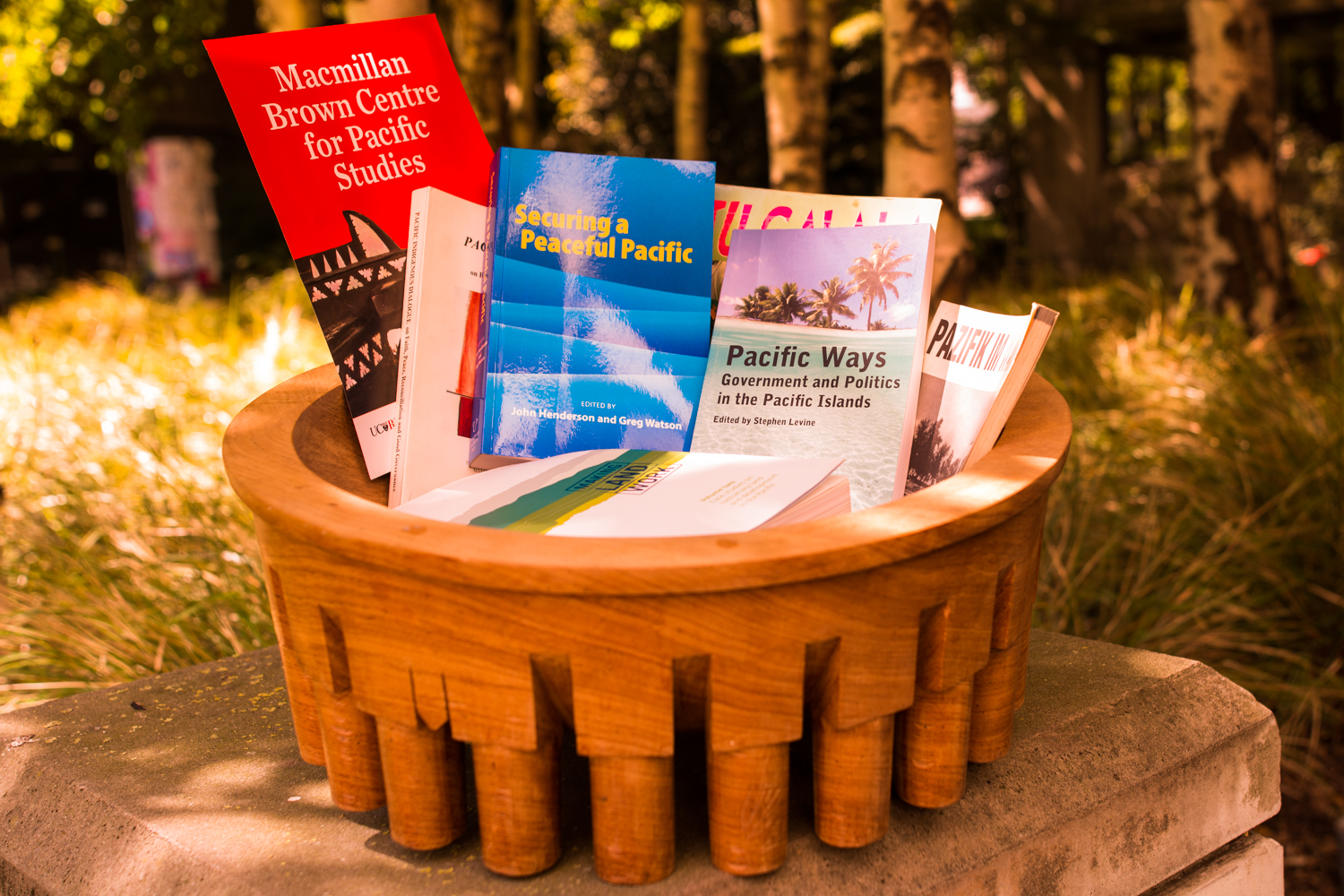 Memory is literal as well as metaphorical, permanent as well as temporal, social as well as cosmological, manifest as well as latent. It is embodied as well as expressed. The photo above illustrates symbolism of two different modes of memory: the tanoa (a bowl used in the Pacific for kava ceremonies), an artefact which embodies Pacific cosmological memory and books as symbols of “western” scholastic memory. The syncretic relationship between different conceptions of cultural memory characterises contemporary societies in complex ways. Photo by Jovanie C. Espesor.

This issue of Pacific Dynamics marks the anniversary of the Oceanic Memory conference that was held in November 2018 Christchurch, Aotearoa New Zealand.  The three day event was a collaboration between the College of Arts and the Macmillan Brown Centre for Pacific Studies at the University of Canterbury and the Memory Research Network Aotearoa.  The conference attracted scholars and artists from around the world, including the Pacific, New Zealand, the United States, Europe and Australia, who were interested in how memory, as a political, poetic and technological practice, might help us to address some of the more urgent cultural, social, historical and ecological concerns facing the Pacific today.  A wide range of disciplines were represented at the conference: this included literary, film and media studies; art history and theory; cultural studies; political science; sociology; anthropology; psychology; social policy; sport; health and law.

Memories are complex, selective, either deliberately or unconsciously, and evolve over time.  Some memories are more hegemonic and powerful and some are subordinate and marginalised.  The dominant stories of the Pacific are usually told by foreign historians, anthropologists, political scientists, journalists and travel writers, who define Pacific societies through deficit lenses as environmentally devastated or economically undeveloped. These narratives are often at odds with how Pacific peoples see themselves, live their lives and frame their collective and individual memories and meanings.

Contemporary Oceanic memory is shaped by a multitude of forces.  For instance, on the one hand, the threat of climate change is the most recent escalation of a long process of ecological degradation and economic exploitation that includes the effects of colonisation, war, nuclear testing and global tourism. Yet on the other hand, Pacific societies and cultures display strength, resilience and agency in facing the challenges of the new millennium and developing new visions of the future.  These contending discourses shape the form and resilience of communal memory.  Memory plays a vital role in these processes of survival and transformation.

The Pacific Ocean itself is the largest memory system on the planet, as Steven Ratuva suggested in his keynote address: “it stores knowledge of marine life, of climatic changes, of navigational innovations, of life itself.”  Like the ocean, memory is a fluid medium, “a changing construct, a dynamic synthesis of multiple forces — ancestral migration and settlement, colonialism and domination, resistance and decolonisation.”  Oceanic memory, therefore, is a complex open system, a multidimensional process, that preserves and transmits the knowledge and experience, contested or censored, retained or renewed, of many different traditions, times, histories, identities, and forms of life (human and nonhuman).

Storytelling and images are the privileged medium for conveying memories so it is not surprising that most of the essays in this issue focus on art or various forms of embodied experience.  Leonie John and Sylvie Ortega explore the work of well-known Māori authors (Apirana Taylor, Witi Ihimaera, Patricia Grace, Alan Duff), emphasising how specific characters or special objects occupy an “interstitial” space and act as conduits for the transmission of indigenous memory in a postcolonial context.  Anna Boswell’s paper extends the concept of memory to consider how nonhuman species, specifically “associative creatures” like the kiore or Pacific rat, are targets of a violent form of “controlled remembrance” that seeks to eradicate memories of migration, ancestral history and Pacific voyaging.  Maebh Long examines the history of girmit in Fiji, the indenture system instituted under colonial rule, as a traumatic form of “postmemory” which “haunts” the writings of a number of important contemporary authors.  Performance and theatrical production, as Moira Fortin shows, has also been crucial in revitalising language and revaluing local knowledge and practices in Rapanui.  Such collective activities are also important for the maintenance of cultural survival on Vanuatu, as discussed in Lisa McDonald’s analysis of the role that contemporary art associations play in creating a public space for a reflection upon kinship, kastom, and shared histories and genealogies.  Antonio Viselli, on the other hand, considers memory from an intercultural and intertextual perspective in his reading of Gaugin’s adaptation of Polynesian mythology and French Symbolist motifs in a “primitive trinket” carved during his first visit to Tahiti.

We are also grateful to our keynote speakers, Elizabeth DeLoughrey and Sudesh Mishra, for permission to reprint work from earlier publications.

“i am the dreams of your tipuna”: Constructing Oceanic memory in contemporary anglophone Māori literature
(pp. 146-160)

The sea is rising: Visualising climate change in the Pacific islands
(pp. 185-197)

Published by the Macmillan Brown Centre for Pacific Studies, University of Canterbury